DWUUI - DRIVING WHILE UNDER UNION INFLUENCE

DRIVING WHILE UNDER THE INFLUENCE OF UNION PROPAGANDA - TAKE A LOOK AT THESE PHOTOS. IN HUDSON, WI SOMEONE SET OUT TO DESTROY A SENATOR SHEILA HARSDORF SIGN, AND THAT THEY DID. SUCH UNCONTROLLED RAGE! CAN YOU SAY "ANGER MANAGEMENT CLASS". 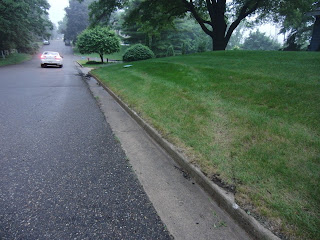 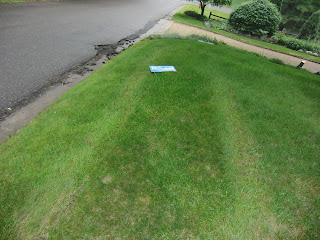 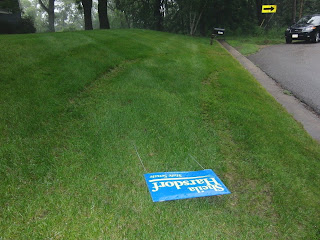 Posted by America's Mrs. Right at 11:20 AM No comments: Links to this post

Governor Scott Walker and the Republicans have won a major victory today! The WI Supreme Court says Walker's union rights law can go into effect.
This is the law that eliminates most of public employees' collective bargaining rights and forces them to pay more for their health and pension benefits.

It's the law that passed while tens of thousands of union protesters stormed and damaged the state Capitol. It's the reason that WEAC's WI Mafia (teacher's union) continues to camp out at the Capital.

The law has been tied up in the courts since a Democrat filed a lawsuit accusing Republicans of violating the state open meetings law during the run-up to passage. Liberal Judge Sumi agreed with the Democrat (no surprise).

But now the Wisconsin Supreme Court has said the judge had no authority to interfere with the legislative process. Hopefully this will be the end of it - but I doubt it.
Posted by America's Mrs. Right at 5:22 PM 2 comments: Links to this post

Watch this - Obama thinks the absence of "shovel ready projects" is a laughing matter. Think he'd feel that way if he were unemployed like about 15% of Americans? I have a message for him. Mr. O., millions of Americans are losing everything. Lives are being destroyed due to the absense of jobs and your "shovel ready projects." It is NOT a laughing matter. Quit making jokes and figure out how to create jobs, for instance, quit slapping new rules, regulations and laws on American companies. Or why don't you remove all restrictions on energy production within our shores? You'd take care of three problems: high gas prices, creation of jobs and energy independence - at last. But keep up what you've been doing and more companies will say bye bye to doing business here. Get A Clue, Mr. O.

Posted by America's Mrs. Right at 4:40 PM No comments: Links to this post

HERE'S AN ARTICLE FROM THE WALWORTH COUNTY WI PAPER. THE TEACHERS HAVE GIVEN UP ON "SENIORITY" HIRING AND FIRING, ALONG WITH RELINQUISHING OTHER PERCS. FINALLY, THEY GET IT! IT'S BETTER TO CHANGE THE WAY THINGS ARE DONE AND STILL HAVE A JOB, THAN TO STUBBORNLY STICK TO THE STATUS QUO AND JOIN THE RANKS OF THE UNEMPLOYED.