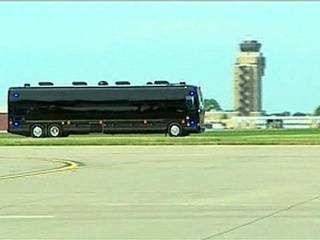 Well, President Disaster, sure got a lot of mileage out of his Big, Black Tour Buses, didn't he? Two buses purchased to haul him and his entourage around on a Not-A-Campaign-Bus-Tour, where Obama spouted off and made promises that he's now "going to concentrate on creating jobs," (how many times has he promised that?), while riding in cool comfort on Black Buses that were built for him in CANADA! Not built by an American company with a branch in Canada, but a real, true Canadian company with ties to Sweden and Volvo.

Now if there were no bus manufacturers left in the U.S., because there's a mass exodus of jobs and companies out of the U.S, (which I will write about in another post, especially Pres. Disaster's friend, GE), then the decision to purchase foreign might make some sense.

But here's the reality. There are at least two American manufacturers of tour buses/motor coaches. They are MCI and Eagle. They both manufacture buses/coaches for many well known tour/transit companies like Trailways, Gray Line, Greyhound, and others. I'm sure these two companies would have been thrilled to build and equip $2.2 million worth of taxpayer-paid-for-buses purchased for U. S. Government use.

Instead, the Disaster in the White House decides to purchase his "green" motorized vehicles from Prevost, a bus manufacturer building buses only in Quebec. And what is he doing with this $2.2 million dollar expenditure? He's traveling around on an energy hog, gas guzzling, air polluting tour bus, promoting himself at taxpayer expense, while he demands that we drive electric tin can cars and forces the government to subsidize the death traps at $7500 a piece.

But hey, it must be okay. Canada was the beneficiary of our magnanimous gift, and they are a U. S. ally, so it's hunky dory, A-OK, don't you agree? Even though Americans are screaming for good American jobs IN AMERICA! And even though Mr. Disaster has made a multitude of "I'm going to concentrate on jobs" speeches, all with no result.

I call this a Slap In The Face to every jobless American, those newly unemployed and those who have been looking for 3-4 years or more, those who have had to take less pay, fewer hours, lost your homes, are living on the streets or in homeless shelters, everyone who's been affected by this miserable administration's inability to put you back to work. What An Insult To All Of You! Remember this when November 2012 arrives.

Oh, yeah, one more thing. Where the heck is the American Flag?? Oh, I forgot, Patriotism is not Politically Correct in Mr. Disaster's world.