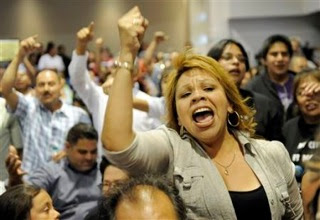 "You old white people. It is your duty to die."


"Go back to Boston ! Go back to Plymouth Rock, Pilgrims! Get out! We are the future. You are old and tired. Go on. We have beaten you. Leave like beaten rats. You old white people. It is your duty to die. Through love of having children, we are going to take over.


"They're afraid we're going to take over the governmental institutions and other institutions. They're right. We will take them over . . . We are here to stay."

Excelsior, the national newspaper of Mexico ,


"The American Southwest seems to be slowly returning to the jurisdiction of Mexico without firing a single shot."


"We have an aging white America . They are not making babies. They are dying. The explosion is in our population . . . I love it. They are shitting in their pants with fear. I love it."


"Remember 187--proposition to deny taxpayer funds for services to non-citizens--was the last gasp of white America in California ."


"We are politicizing every single one of these new citizens that are becoming citizens of this country . . ... I gotta tell you that a lot of people are saying, "I'm going to go out there and vote because I want to pay them back."


" California is going to be a Hispanic state. Anyone who doesn't like it should leave."


"We are practicing 'La Reconquista' in California .."


"We need to avoid a white backlash by using codes understood by Latinos . . . "

WHEN I WAS YOUNG:
When I was young, I remember learning about the immigrants who came through Ellis Island . They wanted to learn English. They wanted to breathe free. They wanted to become Americans. Now too many immigrants come here with demands. But illegal immigrants demand to be taught in their own language. They demand special privileges--affirmative action. They demand ethnic studies that glorify their culture. They demand all of our social services, free to them. They have no intention of assimilating. They only intend to conquer. And the proof is above. And the White House is helping them.

HOW CAN YOU HELP?:
Cut, paste and copy this post and send it to as many Americans as you can. Help get the word out.

Remember when you vote next year that we need someone in the White House who will balance the budget and control illegal immigration. If we make all illegals, legal, then we have lost our country forever. Liberalism will have won and you will have a one party system forever. Redistribution of wealth will be the law. It is called socialism. Our country is heading in the wrong direction and we are doing it to ourselves without serious protest.

And Mr. Obamagration is promoting this with the back-door amnesty policy he just signed - forget that Congress and Americans have said NO to amnesty, he just made it so. Obama needs the Hispanic vote in 2012 and he's selling America to illegals just to get their vote. Had enough yet? Just wait until our "official language" is Spanish.

Bush and Obama have failed to close our southern border, and so the invasion continues.


(This information was sent to me. I thought you would like to see it.


I added my own thoughts and am passing it along.


I will have more info on the Obamagration bill Obama just signed in a future post. )